I have had many God given #22 signs, pointing to 2022 for prophecy concerning California's demise and the Nascar signs are quite an addition to the many other signs I've been given on this.

In February 2020, I was channel surfing the TV and came across the Daytona 500. Why I stopped to watch this Nascar race for a whole 5+ minutes is a first for me. I'm not a fan of Nascar and always thought it was boring and without strategy, like football. Just watching cars going around and around is not very entertaining to me. However, I must have been lead of the Spirit to watch this and I found myself watching for a time and car 22 came into focus.

Suddenly, car 22 caused this massive accident that took out all but 22 cars left in the race. The Spirit upon me seeing this, I knew that represented the year 2022. They called that crash "The Big One." They also call the California mega quake coming "The Big One." I've already been shown 2022 for California in other prophetic signs, so this was quite the prophetic stir for me. So I continued to watch to see what else would happen. 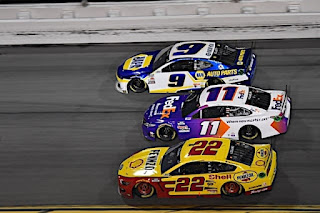 With just 2 laps to go, car 22 was suddenly taken out by car 77. I posted this on Facebook group End Times Investing saying, WOW, what a set of prophetic number signs, because car 77 is the number of fullness, completion, severing, and car 22 representing 2022, was severed from the race by 77. A friend responded back that 2 laps to go equals 2 years to go, till 2022. In that race, car 11, the root of 22 and 77 won the race. So I harbored these signs because though they were strong number signs, more was needed to confirm it to the doubters.

Full forward to October 4th, 2020, 7 month later, I had not seen one Nascar race since, but again, on that day, found myself channel surfing and came across the Nascar Talladega race. When my mind came into focus from being diverted by other things going on, car 22 was on lap 122 and in 7th place. Those prophetic numbers quickened me and I so, I kept watching. I became a little bored with it and channel surfed back and forth with other channels, briefly checking in on the race until near the end, when I stayed with it unto the end of the race.

Now the biggest sign of all for me was that the race finished and was sealed on October 5th. It was scheduled to finished October 4th, but because of the crash at the end, the finish had to, for some strange reason, be rescheduled for the next day, for October 5th, THE 2 YEAR PROPHTIC ANNIVERSARY of my California Yom Kippur dream, when God was telling me through a prophet in that dream, that California would be going down October 5th. That is just crazy confirmation to me. 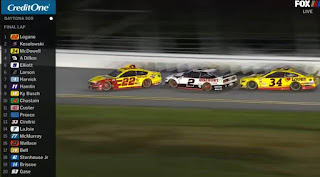 If that wasn't enough for you, full forward 1 year to the next Daytona 500 race, 2021. In that race, Car 22 was in the lead and about to win the race in the end with just 1 lap to go and low and behold, shock and awe, car 2 was pushed into him by car 34 and car 22 crashed. This happened with just one lap to go, signifying one year to go until "The Big One."

Every year of the Daytona 500 results, for 7 years in a row,  fits within a half year margin and shows the countdown to 2022, 7 years in a row. I can't see how this can be coincidence.

Many more #22 signs are at the main page's California free portion link/pic here... 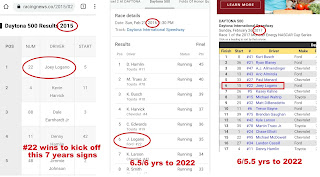